Innovating Play revolves around the cycle of connecting, wondering, playing, and discovering. It is not a checklist of events that need to happen, but rather a process in how one cycle can lead into the next experience. Discoveries from one experience can lead into the connections that start the next cycle. This is what occurred when the California kids took their New Jersey friends in their garden for the second time; discoveries from the first visit led into the connecting points for the next visit.

In our previous post, we reflected on a Shared Garden Experience that began over the winter. We discovered the drastic differences between the New Jersey and California gardens. As a couple months went on, the children in New Jersey studied about the seasonal changes from winter to spring, and the California children studied about the life cycles of insects and plants. Recalling Christine’s wonder from the previous garden experience, she was curious about future curriculum connections that could be supported by visiting the garden. Of course, keeping the New Jersey kids and their studies in mind, she thought with Jessica, “Why don’t we just have our classes meet in our garden, LIVE TIME?”

The kids were back in the garden, a space that was now familiar to both classes. As teachers, we carefully observed and listened to the connections, wonders, and discoveries of our students. The California kids were to observe plants and draw the details of what they noticed. They gravitated towards familiar plants and recalled the names of a few. They noticed different bugs that they had previously seen outside of their garden experience. The kids had a desire to connect insect life cycle vocabulary to the little critters and objects they were seeing in the garden as they called out terms they had learned. Meanwhile, the New Jersey kids were creating a mural and taking in plants that were familiar from the garden tour. Jessica noted that as New Jersey embraces more of spring, her kids are looking for examples of plants that connect to what they have seen in California. While connections were made to what was familiar, there were still new elements that stirred wonders between the kids.

The first wonder that came from both of our classes was HOW. Just HOW were the New Jersey kids going to get to go OUTSIDE WITH their California friends and meet them in the garden? A new discovery was instantly made when the kids learned that New Jersey was going to be coming in via a video chat on the iPad. From there, the kids worked parallel to each other and many wondered aloud. 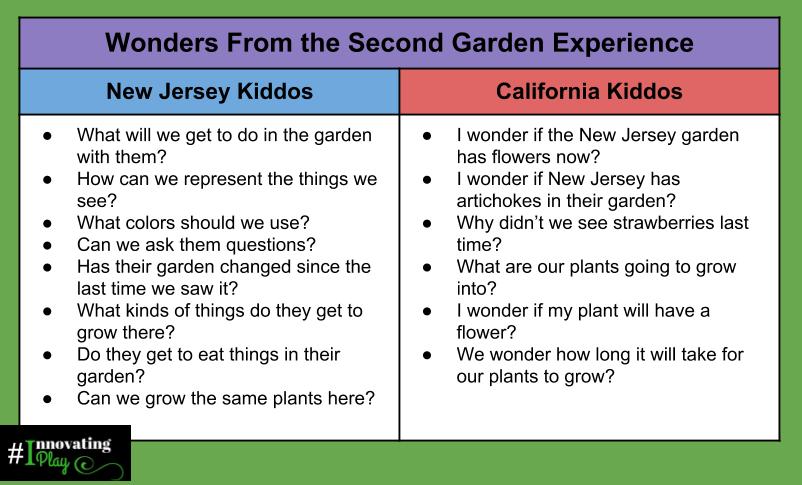 Jessica and Christine shared a similar teacher wonder: Now what? The kids just had a deep and rich experience in the garden, now how to do we build on what we already have?

Experiences Stemmed from the Garden

As we continue to find ways to explore our wonders, our opportunities for playful learning expand. Play comes in the form of art and creation, hands-on processes, and sensory experiences in the garden space.

A TON of new discoveries were made during this meetup in the garden, because the children were given an opportunity to go deeper and explore in a different way than the previous. The California kids discovered items that were not visible in the previous visit, such as strawberries, bird feeders the garden club made, and different colored lizards. The New Jersey kids learned that they could work collaboratively to create an art representation of the California garden by using paper scraps. They, along with the California kids, had the opportunity to pay more closely to details of items that were visible during the first visit, such as a birdhouse, the shed, and compost. Together, the kids discovered some of the fruits and vegetables that can grow in California, and how some of those plants cannot be grown in New Jersey.

This experience gave Christine an opportunity to really tap into the schema and background knowledge of her students. Their schema had expanded as they learned more about insects and their life cycles, but were identifying bugs that looked similarly to, but were not larva. This also happened when the kids were seeing a wood chip or a dark stiff leaf as pupa. She explained to the kids that the best way to find out, would be to put those items in a container or jar to see if any changes occur. She also learned how her kids are so accustomed to having plant life around them, that some were not familiar of having to wait for newly planted plants to grow (as some kids were expecting them to instantly grow).

As educators, Jessica and Christine continue to discover more as their kids collaborate. In this particular experience it was HOW the live time video chat was utilized. The kids were not just sitting and taking in information from each other. Both groups were actually working AND learning together; they were DOING things at the same time. Connection means that learning can be done in different ways, with different tasks, but learning is still happening TOGETHER.